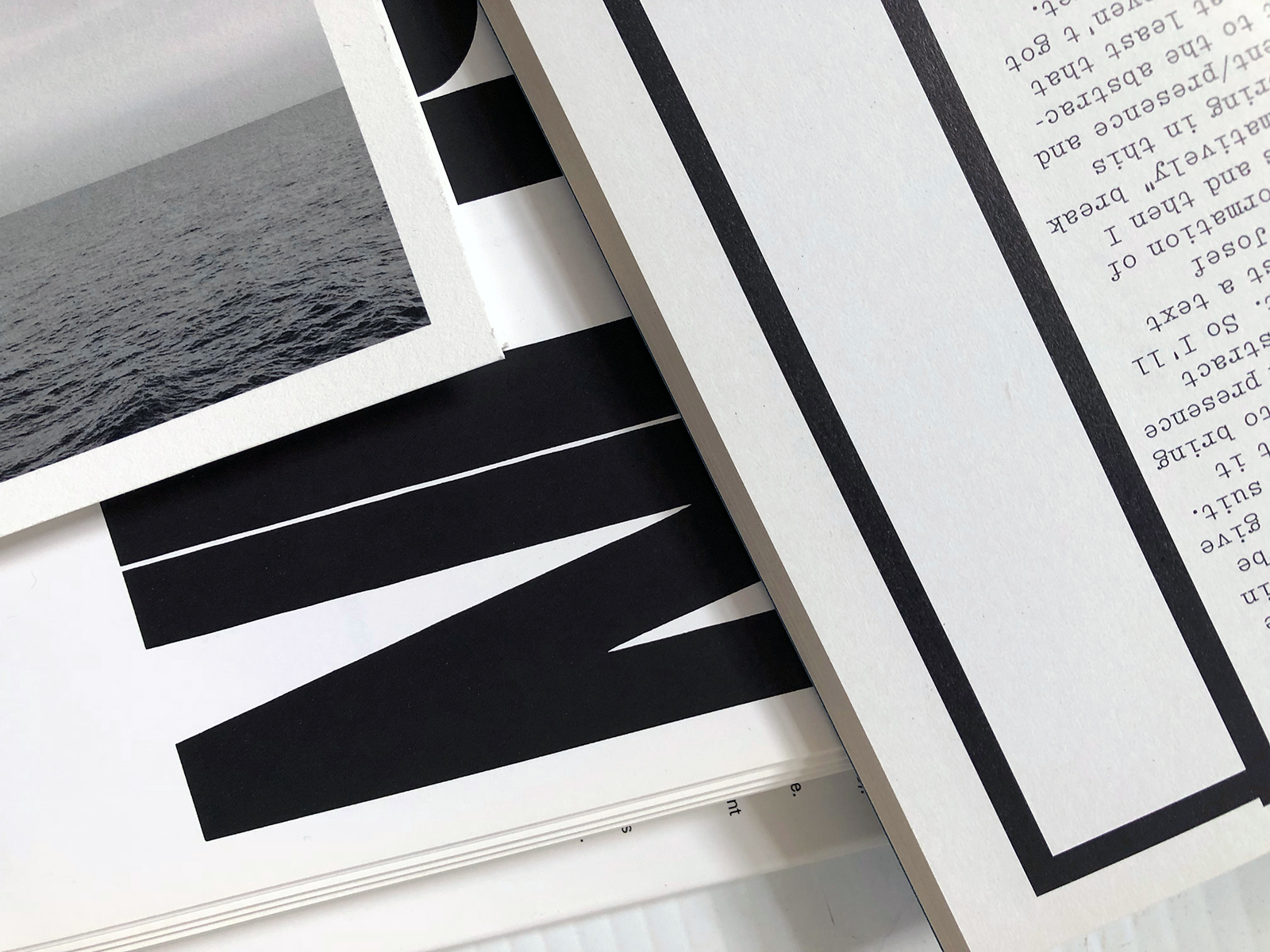 It all began with an empty barn in an unfamiliar place during the summer of 2018. Through a series of seemingly uncoordinated and independent actions a kitchen, a cleanup area, a presentation area, a screen printing studio, and a host of responses to the theme, Rewrite, came together over a week. This was the experience that 24 people in Vinalhaven, Maine and 16 people in Devon, UK had while attending DesignInquiry, a gathering of practitioners from diverse fields who come together to generate new work and ideas around a single topic.

Meals were shopped for and prepared collaboratively, dishes were cleaned and put away while in conversation, and prompts were given and responded to. At the end of the week an impromptu exhibition of-sorts formed to highlight the work each participant had intended to complete, as well as work conjured up spontaneously.

When the last remnants of what we built in the barn were removed, we all asked “What’s next?” How can this work live on and be expanded upon? 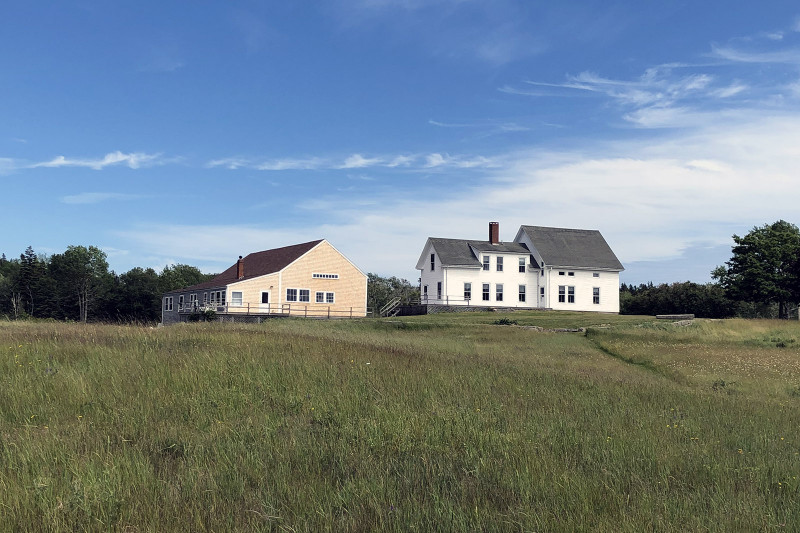 “To design is always to redesign”
Bruno Latour 2008

Everyone carries precedents with them. It may be a memory, an object we are fond of, a quote that helps us clarify how we think, an idea we enjoy. These collected items find their way, directly and indirectly, into what we make. It could be an extension, a completion, and/or a diversion of what has been seen or done before.

How we synthesize our precedents is how our work is rewritten. Sometimes this is direct, and takes the form of inspiration. Other times it is a spark in the beginning, middle, or end of the process. Over the week at DesignInquiry, each inquirer explored deliberate and intuitive rewriting as an implicit part of the creative process. 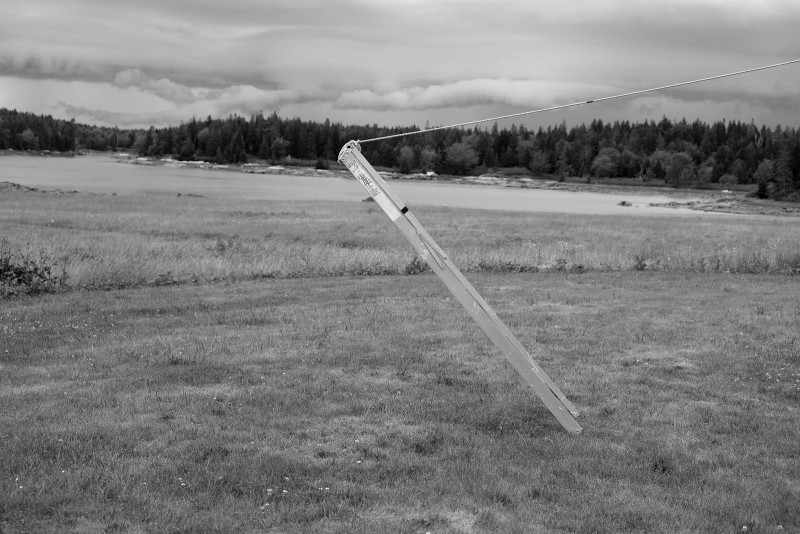 There were writers, graphic designers, architects, curators, linguists, teachers, dancers, photographers, and bakers—all whom proposed a project for the week. Some brought experiments and prompts for the group to undertake. There were planned outcomes, but new ideas sparked more work than what we expected to complete. 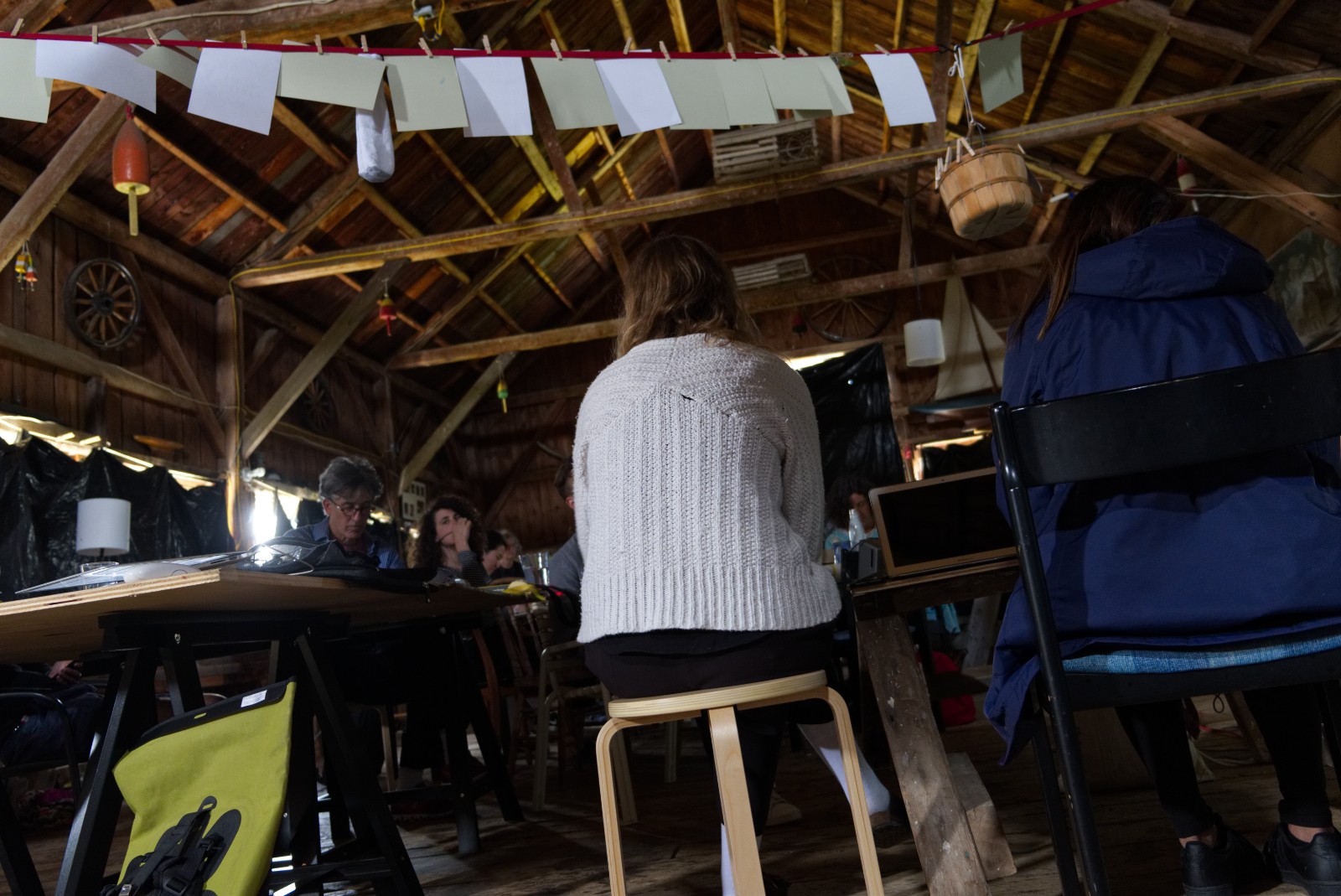 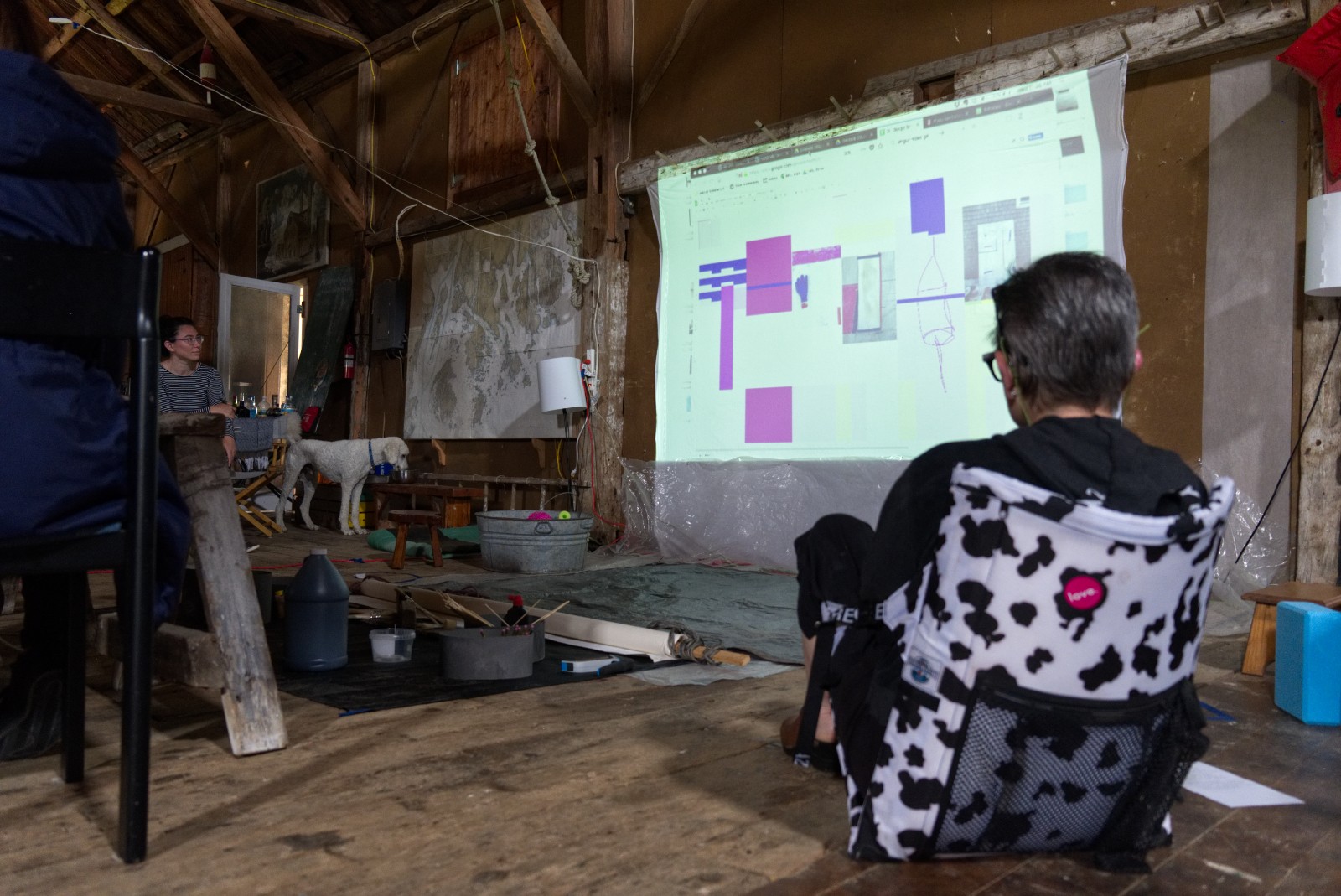 Q Collective’s challenge was to create a dynamic archive of a serendipitous experience with many ineffable outcomes. To do this, we proposed an interface that rewrites what was rewritten during DesignInquiry. By doing so, new connections and insights can continue to be made by participants and by site visitors unfamiliar with the residency and organization.

The most useful interfaces are a balance between clarity and confusion. An interface should be a rich journey that requires participants to explore freely, discover new nooks, and encourage them to learn more. To do this we balance fixed structures with dynamic content. 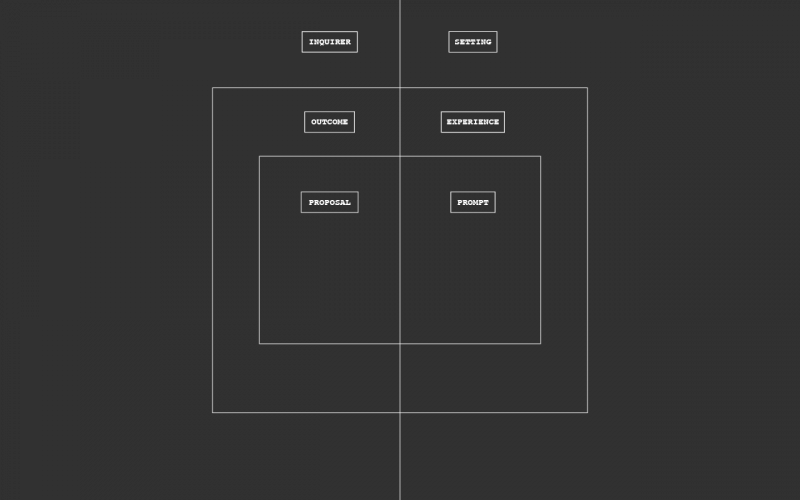 For the Rewrite archive, we divided the screen into six overlaying zones: the inquirer, the setting, the outcome(s), the experience, the proposal, and the prompt(s). Each inquirer could submit text, images, video, and/or audio in response to any or all of these categories. Each zone has a banner (image, video, or audio) that can be clicked for more in-depth information. The layout and information on each inquirer’s page is fixed in location.

The archive’s primary interface is the site’s front page. Each time the page is reloaded or revisited, content in each zone is randomly loaded from any of the 40 inquirers. The location of the zones stays the same while the content always changes. Not all of the zones are filled with content creating an irregular counterform around the outside edge. 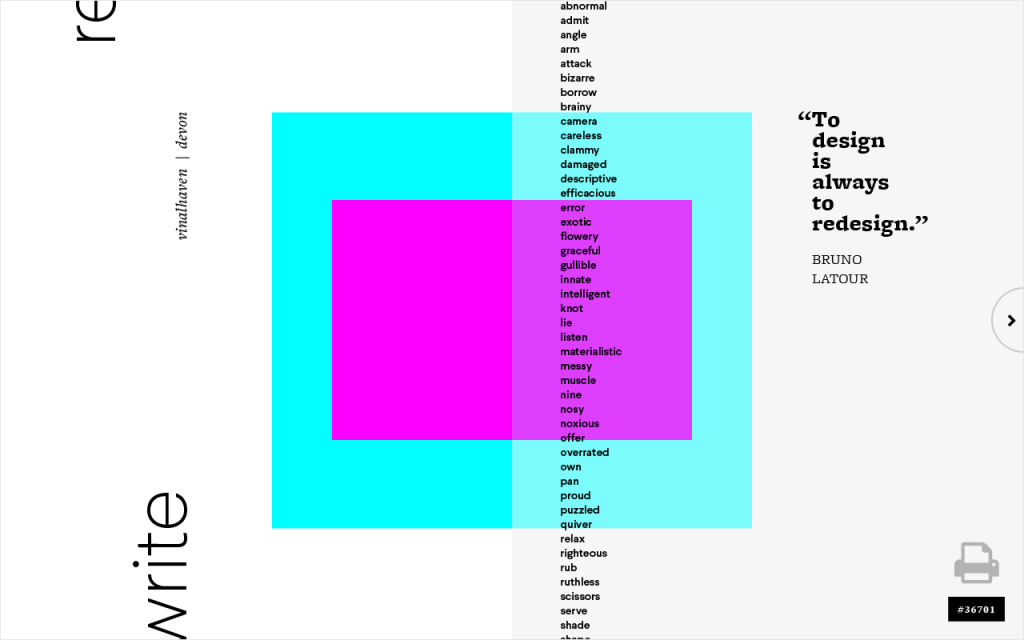 A single ‘next’ button on the right side of the window encourages site visitors to load more combinations. Clicking refreshes the page which builds another composition. 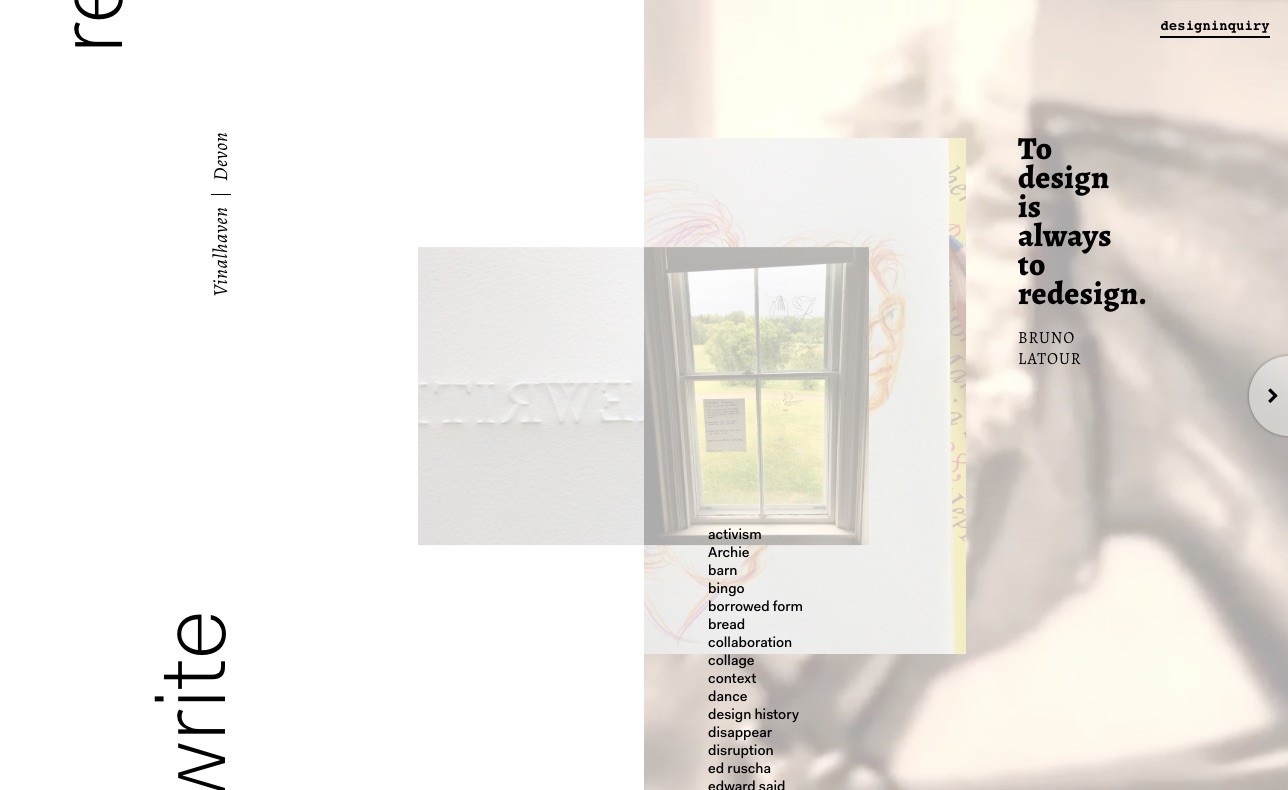 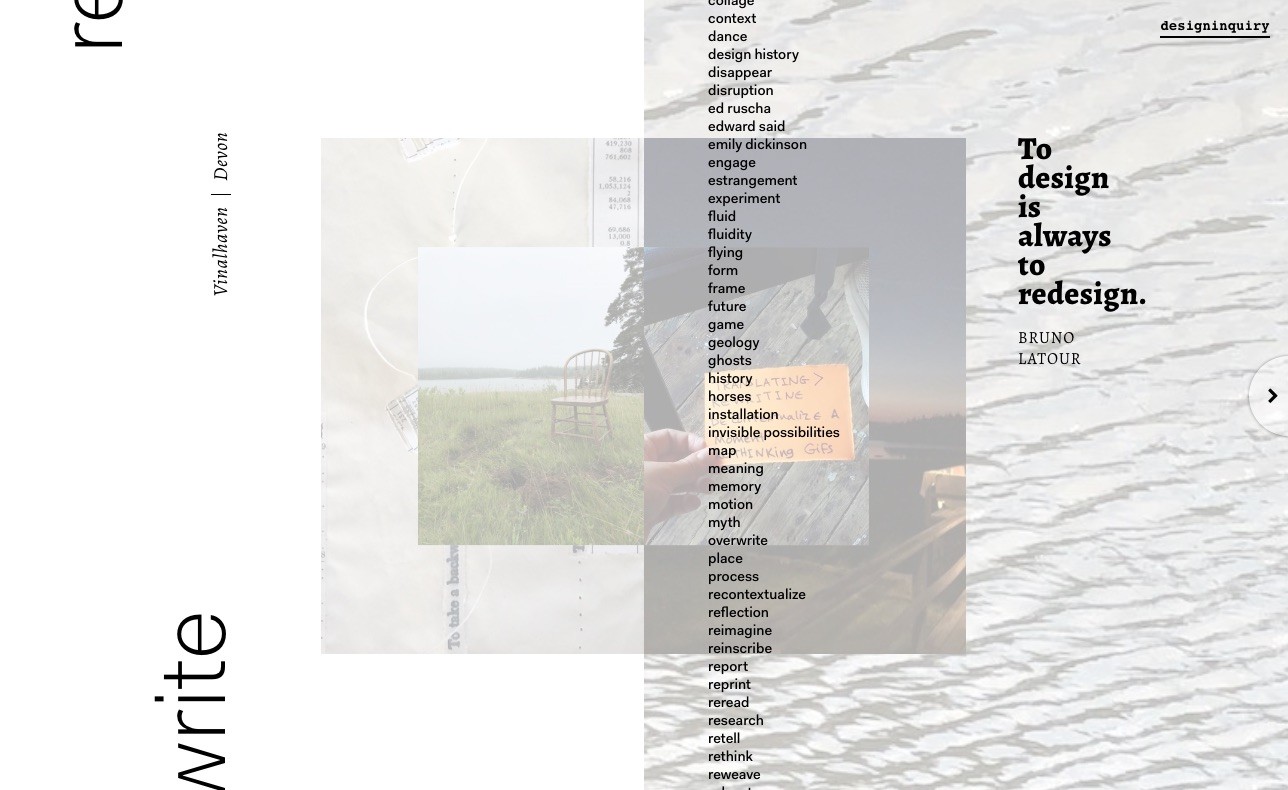 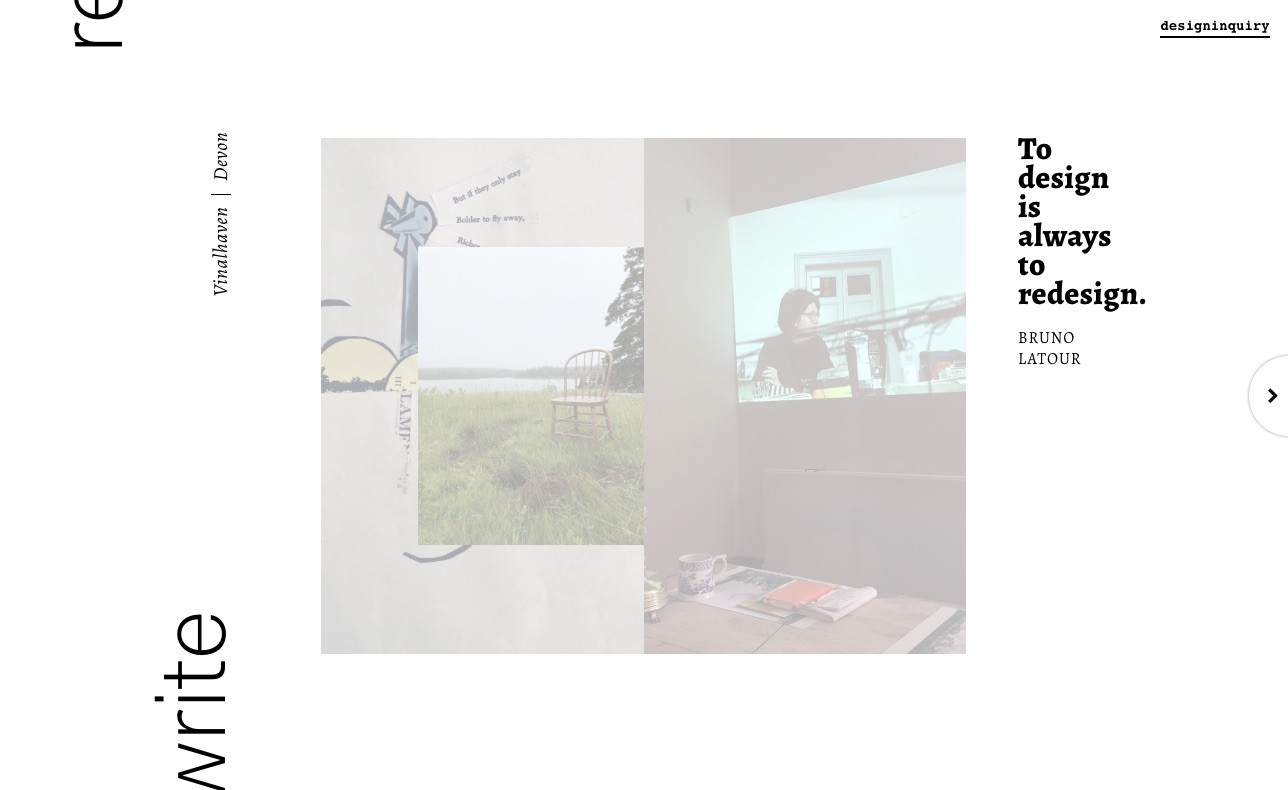 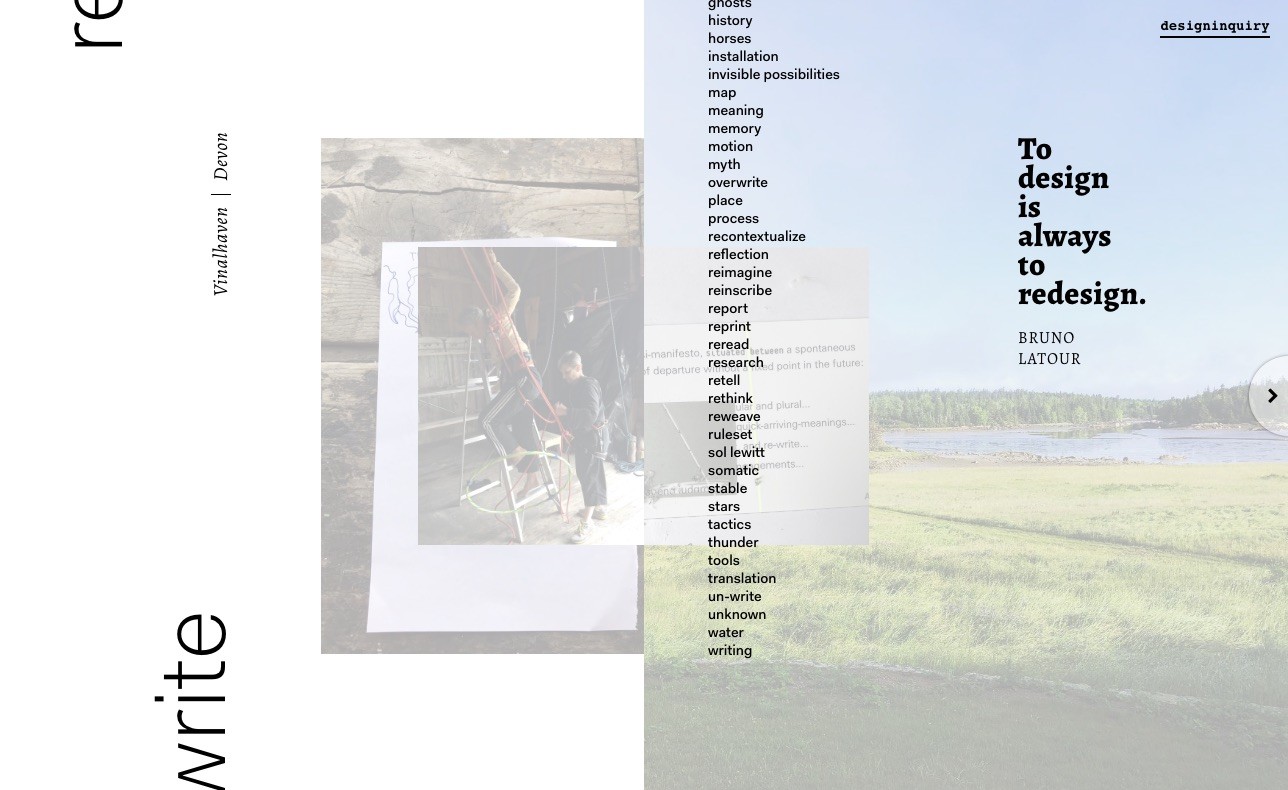 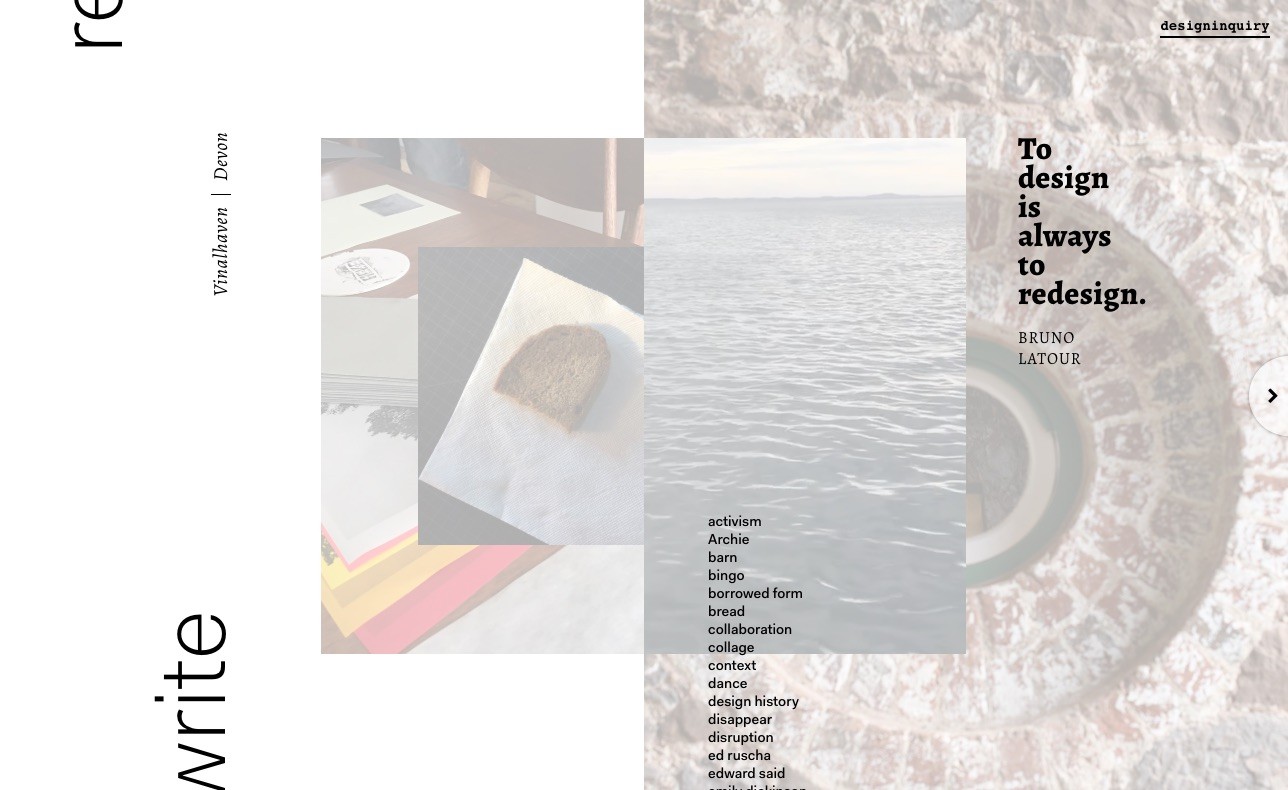 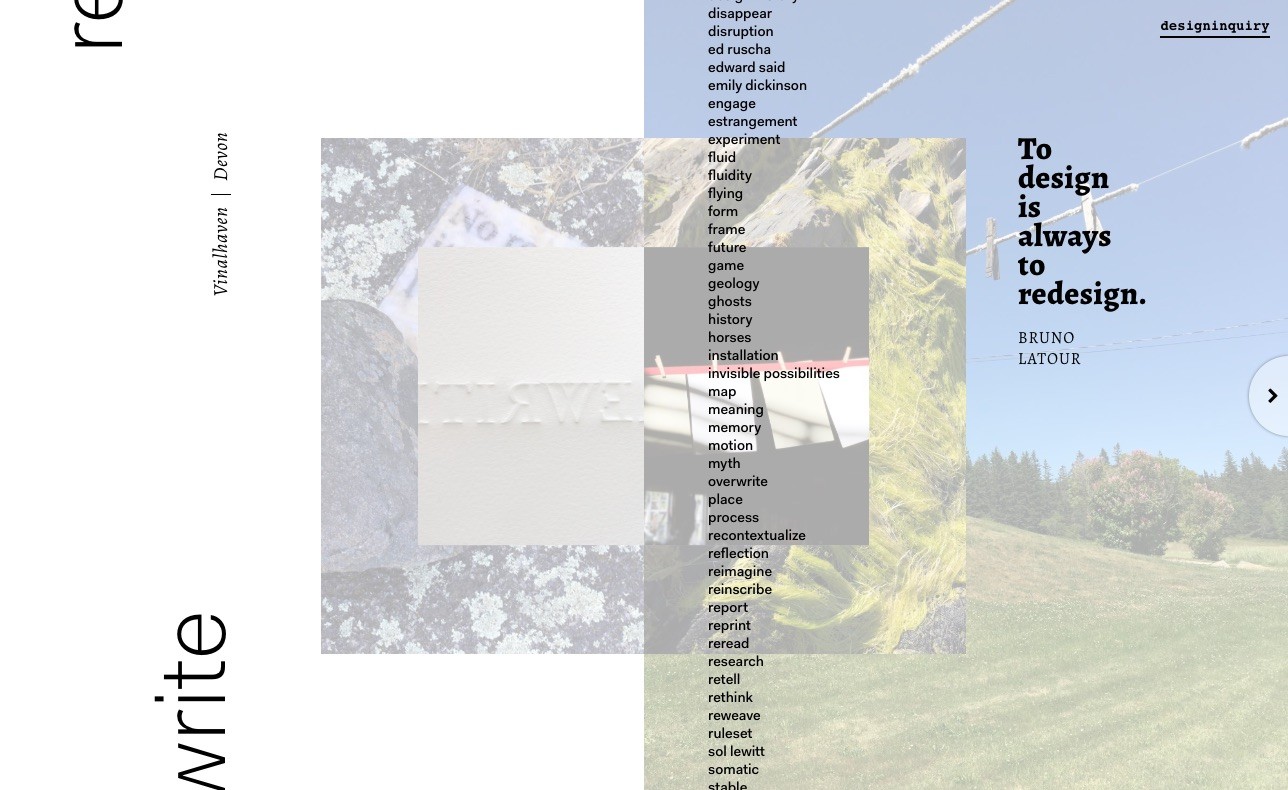 In addition to serendipitous connections formed by the primary interface, each piece of content is categorized by tags. The tags apply to all six different types of information submitted by inquirers. Tagging allows for a different way to discover connections through narrative. A marquee of tags also adds another dynamic element to the front page. Content pages also include relevant links to related people, projects, prompts or outcomes, further showing the connections between participants and ideas explored over the week. 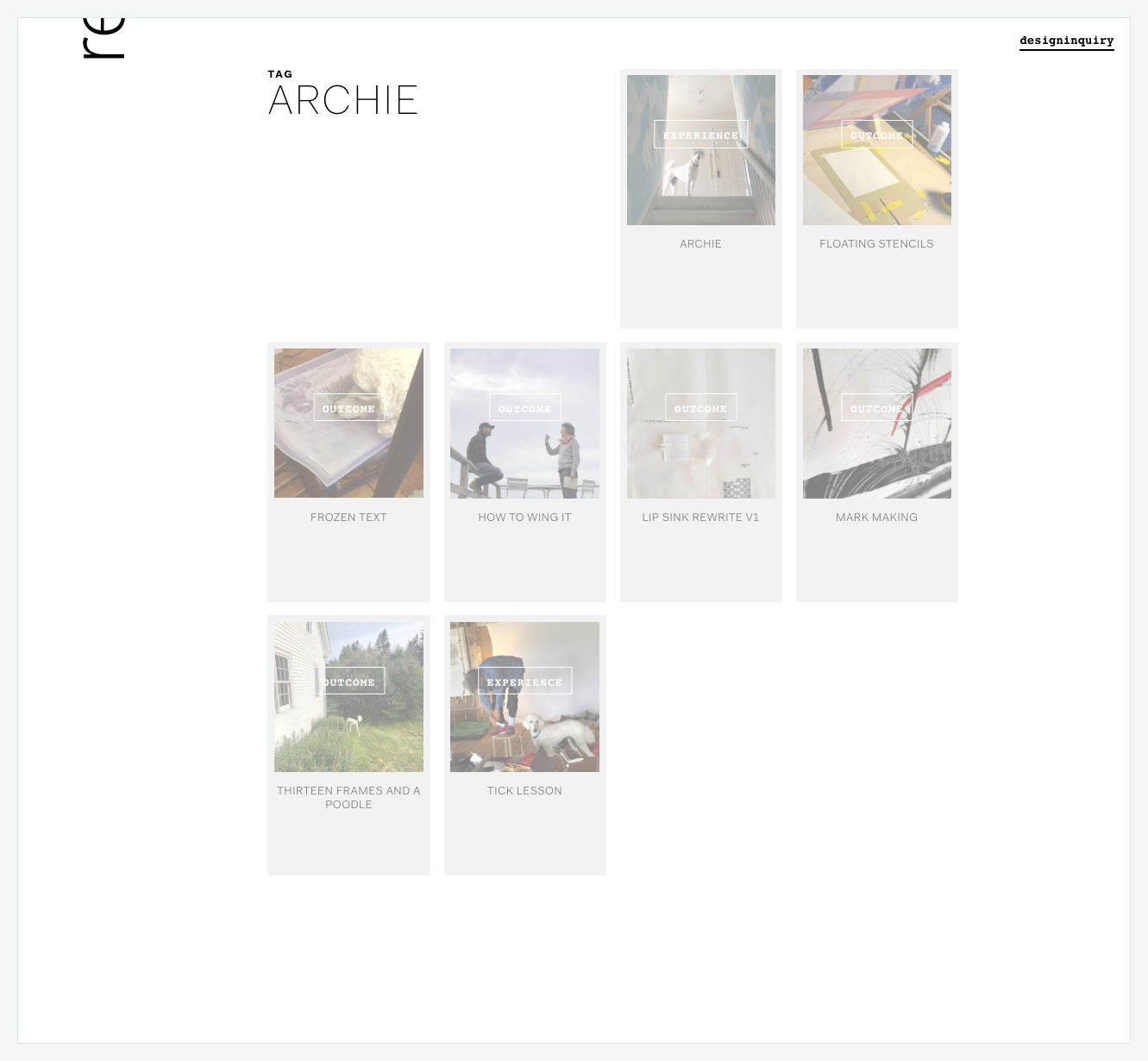 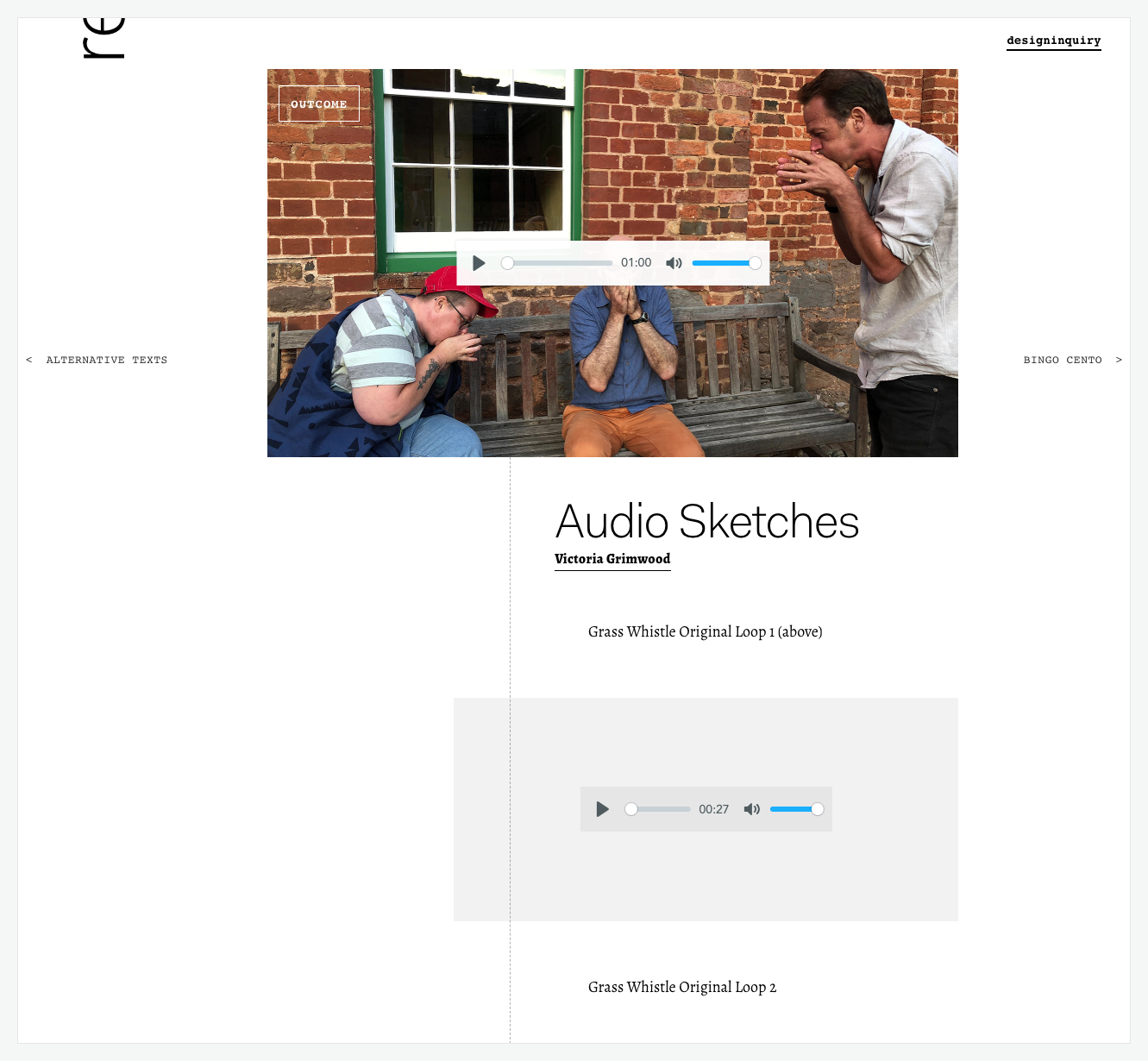 Can an interface accurately represent experience? No. It can, however, serve as a meaningful translation and foster active reflection. By doing so, we hope this site serves as a lively and enduring archive.